Please join the Delaware Valley Section of AIChE and the Philadelphia Section of ACS as we jointly host an event at the Penns Woods Winery in Chadds Ford, PA.  The meeting will include a short history of the winery and a discussion on the wine-making process.

We will have ”heavy hors d’oeuvres” including an Italian meat and cheese platter, relish platter with marinated mozzarella, olives, peppers, artichokes, and mushrooms, as well as a dessert platter with homemade cannolis and cookies.  Participation includes a tasting and sensory analysis of six wines, as well as a Penns Woods Wine glass. 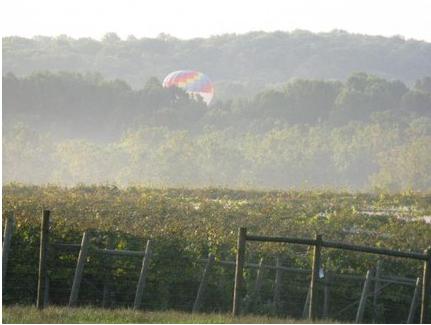 Penns Woods Winery is the result of Gino Razzi‘s lifetime of experience in the world of wine. A respected importer and distributor of wine, Gino is an Italian immigrant from Abruzzo, in southern Italy. He settled in the Delaware County area in 1962, where he was fostered by the area’s Italian-American community. Gino served four years in the United States Marines then attended college in California. After graduation, he returned to Pennsylvania to rejoin family and friends.

With three decades of success as a wine importer, in 1995, Gino turned his experience towards the craft of winemaking.  He finished his first wine in 1997. Symposium, a Montepulciano d’Abruzzo was his first commercially released wine, and was awarded 95 points by Wine Spectator Magazine.  This publication recently honored this wine again with its inclusion in the retrospective article “Italy’s Golden Vintage – the 1997 Harvest” in 2007.

Gino’s pursuit of perfection led him to his own back yard. In 2002, he began to craft wines from Pennsylvania–grown grapes. To his surprise, he found that great wines can be made in Pennsylvania.

After a two year search for an ideal vineyard site, Gino decided to purchase the Smithbridge Winery, in 2004, to take advantage of its 25-year-old vines.

Gino is convinced that Pennsylvania has the capability to produce world-class wines and hopes to contribute to the legacy of hard work and artistry of his predecessors. As a symbol of these aspirations, one dollar from the proceeds of each bottle of Penns Woods wines is donated to furthering wine and grape research in Pennsylvania.