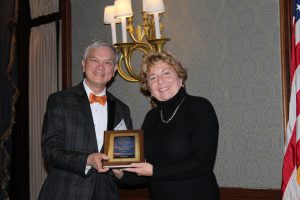 Steve brings proven and trusted expertise to drive engineered capital projects for pharmaceutical manufacturers. He leverages his technical know-how with his management background and broad regulatory compliance experience to benefit the engineers, scientists, and operators who are tasked with executing the design, construction, start-up and qualification of new or renovated manufacturing facilities.

In 2017 Steve spoke at two DVS “PDH” sessions, the AIChE Regional Student Conference, the Process Solutions Summit (sponsored by Eastern Controls), and at several Lunch and Learns. He mentored a chemical engineering co-op student, judged entries to the 2017 Student Paper Award for Delaware Valley Engineers’ Week, and helped develop the skillsets of colleagues. He contributed to the engineering profession with the new edition of his book, Rules of Thumb for Chemical Engineers, which gives practical advice, information and mathematical formulas that are used by process and project engineers throughout industry (Sixth Edition, Elsevier, 2017), and by authoring white papers on CIP system design and utility systems for bioprocessing.

Deborah Grubbe was the former Vice President of Group Safety at BP, and held corporate director roles in safety, operations and engineering at DuPont.  Now running a private,
global consulting firm, Deborah was a member of the NASA Aerospace Safety Advisory Panel for 9 years, and consulted in safety culture with the Columbia Shuttle Accident
Investigation Board.

She currently works around the world helping corporations address their occupational safety, operational and process safety issues. She is an Emeritus Member of the Center for Chemical Process Safety, a former Board Member of the American Institute of Chemical Engineers.  As a member of the National Academy of Construction, she leads its safety committee. With AIChE, she is currently the Chair of the Licensure and Professional Development Committee, and also leads the AIChE Center for Ethical Practice.

Deborah obtained a BS in Chemical Engineering from Purdue University and attended the University of Cambridge on a Winston Churchill Fellowship.  She is a registered PE in Delaware, a chartered engineer in the UK, and is a Fellow of both the AIChE and the IChemE.  She was named Engineer of the Year in Delaware in 2002, and in 2010 was the first woman to receive an Honorary Doctorate in Engineering from Purdue University for being a leader in safety in the process industries and for her work in supporting faculty diversity at the University.

David Hagan was born and raised in the Kensington and Juniata sections of Philadelphia.  He obtained Bachelor’s and Master’s degrees in Chemical Engineering from Drexel University (’02) and Widener University (’05). He holds a Professional Engineer’s license in Delaware and pending a license in New Jersey.

Dave has worked at KBR since 2008 and recently joined Chemours Project Earth as the KBR Associate Project Manager. His previous roles at KBR include Site Team Engineering Manager at Chemours (formerly DuPont) Chambers Works, where he managed over 30 technical professionals and designers for small capital project design, and Senior Technical Professional on larger capital projects.

Dave would like to deeply thank his family, friends, co-workers, and teachers for their support throughout the years. He resides in Wilmington, Delaware with his family. Outside of family and work, he enjoys being a Philadelphia Flyers and Eagles season ticket holder; however, some years are more enjoyable than others.

He has been a member of AIChE since 1993 and has served on the Delaware Valley Section Board since 2007 where he has held positions as Treasurer, Vice-Chair and Chair. In 2009 he was recognized with an “AIChE Shining Star Award” for his work on the DVS Board. He has also served on the NCEES Chemical Engineering PE Exam Committee since 2009.

Ken worked for over 16 years at Merck in vaccine/sterile liquids, solid dosage and packaging development focusing on products like INVANZ®, RotaTeq®, GARDASIL® and JUVISYNC™. Ken is currently Senior Director and Head of a Drug Product Development group at Shire Pharmaceuticals where his group is developing an ophthalmic product to treat dry eye disease

Charles Rudolph has been Webmaster for Delaware Valley Section since 2002.  An AIChE member since 1957, he served as DVS Chairperson in 1986-87. Charlie earned his Bachelor of Chemical Engineering from the University of Delaware.  He spent his entire 44 year career at Rohm and Haas Company in process engineering, energy conservation, and process control and automation.  He was based at Corporate Engineering in Bristol, PA but relocated to Houston, TX five times and Venezuela once for projects.

Charlie and his wife Carol live in Moorestown, NJ.  They have two sons, two daughters, and four grandchildren.  Their 50th wedding anniversary was in October 2013.

Suzette Schultz has been an AIChE member for 30 years. She has served as Secretary for 8 of those years and has also been Vice Chair and Chair of the DVS. She is currently a member of the DVS Board.

Sue earned a BS in Chemical Engineering and a BS in Chemistry from the Pennsylvania State University. She spent her career in the pharmaceutical industry, spending 10 years at Bristol-Myers Squibb and 21 years at AstraZeneca where she currently works. Sue has experience with process development, scale-up, validation and trouble-shooting. She has launched several products for AstraZeneca and is currently a Senior Project Manager, where she manages projects around the globe.

Sue lives in Thornton, PA and has a grown daughter, Katherine, who is a Fulbright Teaching Assistant in Vienna, Austria.