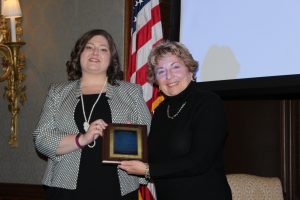 Colleen McGinness is a Senior Process Engineer who believes that passion drives success in both career goals and life pursuits.  She strives to take advantage of every opportunity to learn, as well as pass on her teachings to those around her.

She currently works for Chemours, a global leader in Fluoroproducts, Titanium Technologies, and Chemical Solutions.   Colleen previously had a long tenure at KBR (Kellogg Brown & Root), an international EPC firm with a history of providing technological solutions for clients across all markets.  This has provided her with opportunities to work on projects in both grassroots and revamp designs in the Chemicals, Films, Fibers, and Refining fields.  Most recently, Colleen has been instrumental in the process design of a $250 million multi-unit refrigerant production facility using innovative new process solutions from the R&D phase through construction. She was the lead for several of the process units in the production facility during FEED and led the process design for one of the process units during Production Design.  She also provided technology consulting on all process units during the design process. In her newest role with Chemours she is tackling commissioning and turnover of said facility, and will be supporting startup of this operation later in 2018.

In her spare time, Colleen has been active in the Delaware Valley Section of AIChE as Chair of the Continuing Education Committee, personally hosting over 25 events devoted to providing local professional development opportunities for licensed engineers.  She has participated in and led leadership development courses for college students as an alumni staff member for Alpha Phi Omega, a national co-ed service fraternity.  She enhanced a mentoring program for young professionals at KBR by providing soft-skills training classes as well as hosting open discussion meetings with the company’s leadership team.

Colleen earned a B.S. in Chemical Engineering from Rowan University, is an EIT in Delaware, and is currently pursuing a PE license.  Outside of work, she enjoys traveling with friends and playing with her Pitbull, Casper.

Peter Schwalbenberg is a Rowan University Alumnus who graduated with a B.S. in Chemical Engineering in May 2013, specializing in Materials and Biological Engineering. His undergraduate research includes microfluidics of PDMS-stabilized microbubbles and developing hydrogel tensile testing modules for engineering education. He also received the Award for Outstanding Service to Chemical Engineering Department for 2013.

Peter has been employed for over 3 years with Inolex Inc., a Personal Care and Cosmetic ingredients manufacturer and supplier in Philadelphia, Pennsylvania. His experience includes the role of the Process Development Engineer where he has piloted their new scale-up program for commercial production of new products in the industry. He also served as the company’s Process Safety Engineer maintaining site environmental compliance on the city, state and federal level as well as conducting process risk assessments throughout the site.

Peter now serves as the Process Engineer where he conducts process troubleshooting for reacted and blended products as well as leads the Process Quality Team. He is the  head of the PSM program onsite and manages various capital projects including fire hazard detection throughout the plant and increasing productivity of onsite flaking operations.

Peter has been a member of AIChE-DVS since July 2013, organizing social events, volunteering at K-12 outreach activities and speaking at academic event with student chapters. He served as Chair of the Executive Board in 2015-2016, leading the Board of Directors and collaborating with other engineering organizations. He is now Immediate Past Chair 2016-2017 and has received a Shining Star Award 2017, from AIChE – Global for his achievements and service to his local section.

Giselle has been a member of AIChE since 2010 at the student level and joined the Delaware Valley Section in 2014. In addition to her current role as the Delaware Valley Section Vice Chair, she also holds several positions at the global level including Programming Co-Chair of the Young Professionals Committee and K-12 Coalition Co-Chair and board member for the Societal Impact Operating Council. She is currently leading a large grassroots outreach initiative starting in the Delaware Valley local region that is funded by the AIChE Foundation. The program goal is to spark widespread outreach programming throughout the local sections of AIChE by making resources easily accessible and encouraging collaboration and sharing of best practices within a community webpage.

Giselle is employed by Laporte Consultants in King of Prussia and works in the areas of process design and validation for food and beverage and pharmaceutical clients in the region.Outside of work, she enjoys spending time outdoors during all seasons of the year and has also made homebrewing beer a hobby. Giselle is grateful for the opportunity to contribute to the thriving Delaware Valley Section and hopes to continue to inspire the next generation of engineers and business leaders throughout her career.

A Malaysian native, Laura-Ann Chin graduated from the University of Arizona with a B.Sc. degree in Chemical Engineering. Throughout her undergraduate career, Laura has worked with numerous cutting edge projects including studying endocrine disrupting compounds in wastewater, researching genetic stability of E.Coli in a novel COSBIOS reactor (RWTH, Aachen Germany) and designing an automated zebrafish tracking system using MATLAB (STUBA, Bratislava, Slovakia). Laura performed her graduate studies at Villanova University on the characterization and upgrading of biocrude oil from waste lignocellulosic biomass where she obtained her M.Sc. also in Chemical Engineering under the mentorship of Dr. Justinus Satrio. At the age of 22, Laura is proud to have authored and co-authored 5 engineering publications.
Currently, Laura consults as a process engineer for Jacobs Engineering in Conshohocken, PA where she is involved in the design of biopharmaceutical facilities internationally. Laura has served on the executive board of AIChE DVS for two years as Secretary and is actively involved in running the continuing education series (PDH). In addition, Laura engages in SWE, Engineers’ Club of Philadelphia Young Professionals Group, Jacobs Women’s Development Network and the Jacobs Employees Club of Philadelphia.

Daniel Sujo has served in the AIChE Board for since 2011 as Student Coordinator and Associate Treasurer. He served as Chair in 2014-2015.  Daniel completed his masters at Rowan University and his bachelors at ITESO (Mexico) both in Chemical Engineering. He has worked in the fine and specialty chemical industry with focus on process design. He currently works at Inolex, Inc. as a Process Engineer. He has worked at Ferro Corporation and Siegfried (USA) in similar roles and at Rowan University as an Adjunct Professor. Daniel lives in Philadelphia with his wife, daughter and son.